Bangalore IT City – The Silicon Valley of India

Bangalore the IT city has made a significant contribution to India’s technology space. The Information technology industry in India consists of two components IT Services and Business Process Outsourcing. The sector’s contribution to India’s GDP aggregated at 7.7 % from revenues of over $180 billion in 2019. While it is projected to grow to $350 billion by 2025. The sector employs more than 4.36 million employees in the country and is a major foreign exchange generator. Bangalore takes a big chunk of the IT pie by contributing to over 38 % of all IT exports.

The spectacular rise of India as a technological powerhouse has been fuelled by the indomitable spirit of her people.  Economic investment boomed after 1990s, by phasing out the cumbersome License Raj. This meant a new breed of entrepreneurs and innovators took the limelight as opposed to public sector undertakings. These future titans of industry had a proclivity to being dynamic and exhibited decisive leadership. These new minds in Information Technology, Bio-Technology, and Space Engineering made innovation the mantra for success.

Using English as a mode of education after Independence, ushered in the establishment of Institutions of Excellence. Institutes like the Indian Institute of Technology gave a new impetus for strong development. India’s rise to economic stability in the 1970s and ’80s is attributed to the government’s industry-friendly policies. This ushered in the Green & White revolutions.

India’s Tryst with Destiny – The Bogey of the British Raj.

All the prosperity seen in recent years must be celebrated without forgetting India’s painful past. The country’s freedom was a hard-fought one with millions of lives lost with the division of the country. The economic rise of Britain for over 200 years was financed by its depredations in India. Britain’s industrial revolution was premised on purging India’s riches, destroying her institutions while creating division among its people.

India’s share of the world economy when Britain arrived on its shores was 23 percent. By the time the British left, it was down to below four percent. This incessant exploitation could not be sustained for long after the Second World War. The war depleted Britain of her resources making it difficult to govern her colonies.

India was left to fend for itself with widespread poverty and disease when it gained independence in 1947.  India however benefitted to some extent from the British exploits in the country. The British were great administrators. The Indian Bureaucracy and Civil Services are modeled on the rules, and laws created by the British to govern her colonies. While the most significant of all was the promulgation of English as the ‘Lingua Franca’ of India. 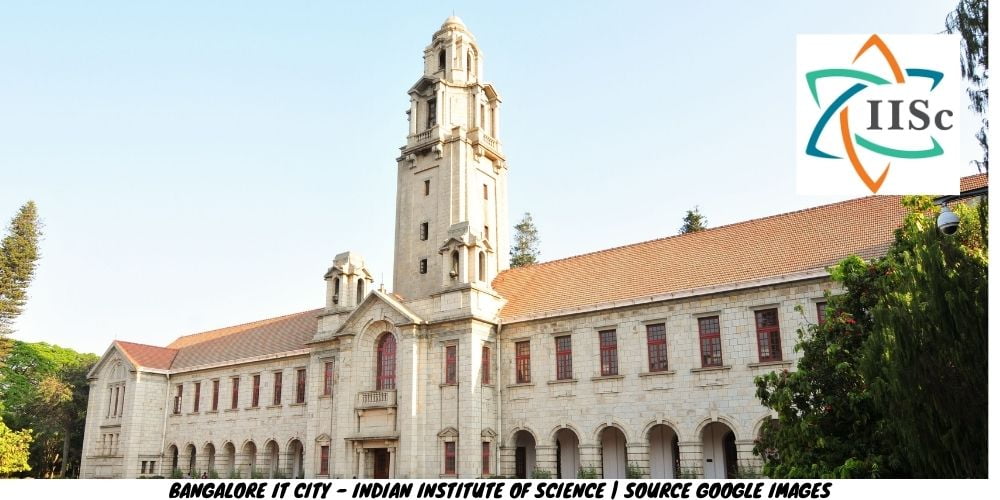 The IT industry was a direct beneficiary of making English one of the official languages in the country. India witnessed an education boom with many engineering & medical colleges established from the 1960s and 70s.  The incubator for Bangalore’s rise was set by reputed public sector undertakings in aerospace, telecom, space, and defence. Institutes like the Indian Institute of Science, Indian Institute of Management, Bharat Heavy Electricals,  and the Hindustan Aeronautics Limited made have their head offices here. 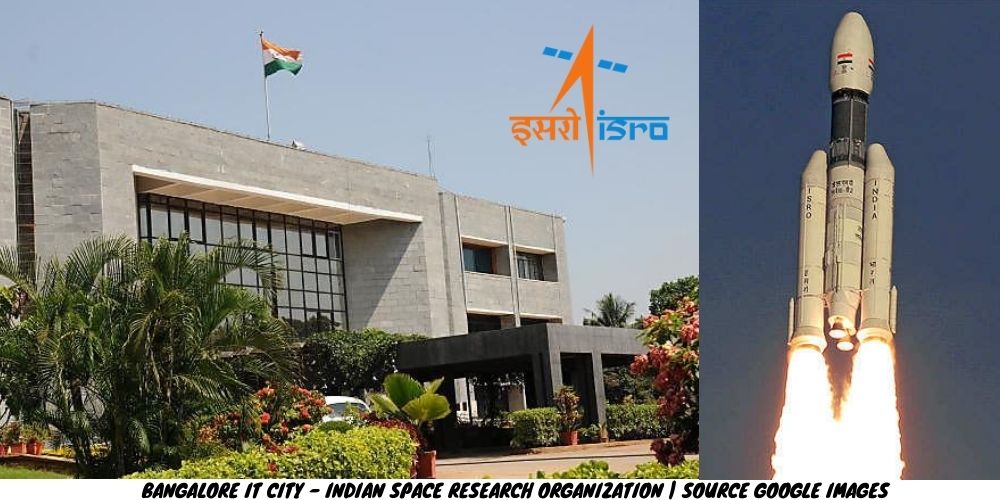 The success story of Infosys & Wipro the IT companies in Bangalore changed the way the world looked at India. Young entrepreneurs like NR Narayana Murthy and Azim Premji exhibited tremendous will and determination to make it big. Infosys and Wipro are now Information Technology titans bustling with brilliant engineers and talented management graduates. Which prompted IT majors like Accenture, Oracle, IBM, and Intel to start operations in the city.

While other factors like the city’s IT corridors Electronic City & ITPL at Whitefield further boosted investor confidence. Infrastructure got a fillip with the Namma Metro and the new Bangalore International Airport. Incidentally, there are more than 67000 IT services companies in Bangalore with over 12000 are working full time. 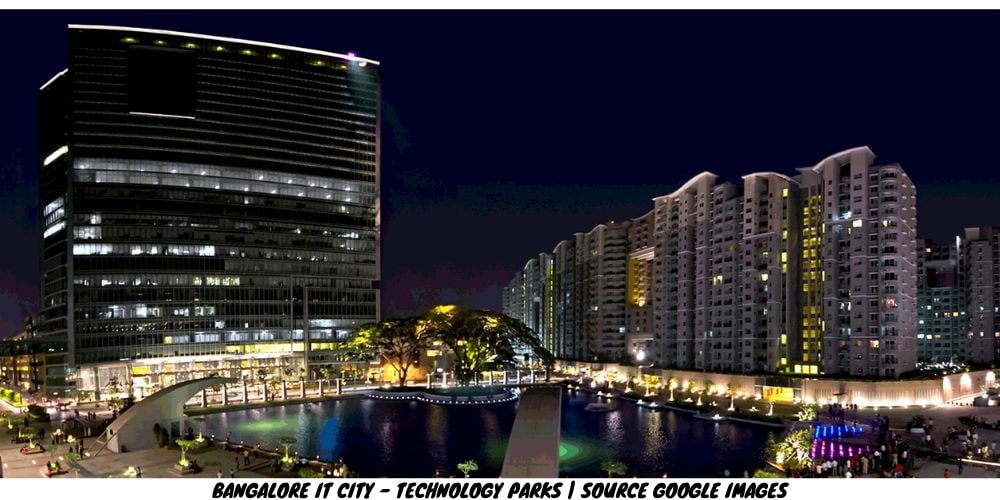 Namma Metro or Bangalore Metro is a rapid transport rail network serving the city. The new metro connects the city centre to the IT and industrial corridors in the city outskirts. Interestingly, the average daily ridership is about 450,000 passengers and increasing. The metro network has proved to be the most efficient mode of transport. The system is a high capacity carrier, eco friendly with no air and sound pollution.

Its low ground space occupation and faster journey times have proved a boon for residents living in the city’s outskirts. Works on the Red and yellow lines are proceeding at a rapid pace. This means it will connect Bangalore IT hubs in ITPL and Electronic City to the rest of the city. 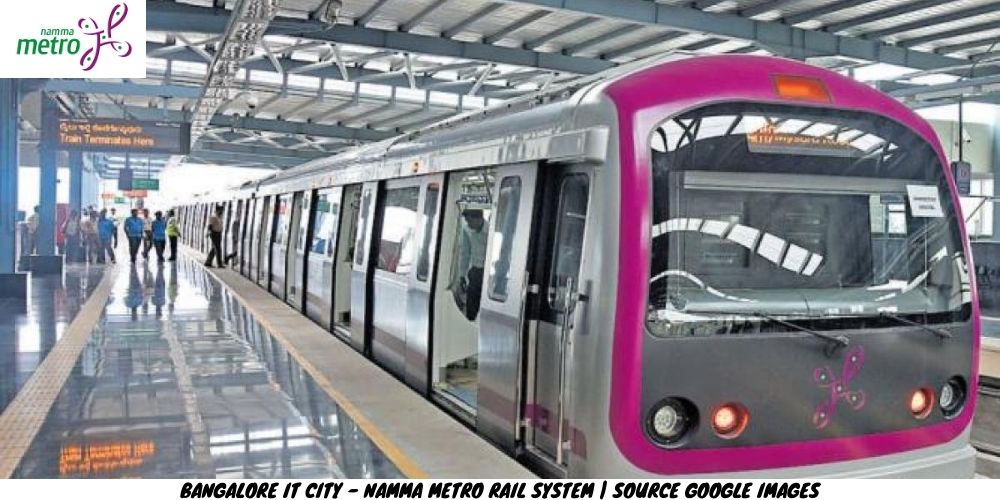 The Kempegowda Bengaluru International Airport has helped the city connect many domestic and international destinations. Which has made air travel fast, reliable, and pocket friendly for its residents. The Airport’s stellar rise is evident in the phenomenal rise in passenger traffic since it started operations in 2008. Bangalore airport operates long haul flights to far off destinations like Seattle, London, Paris, Dubai, and Singapore. It has made Bangalore a hobnob for collaboration and innovation. 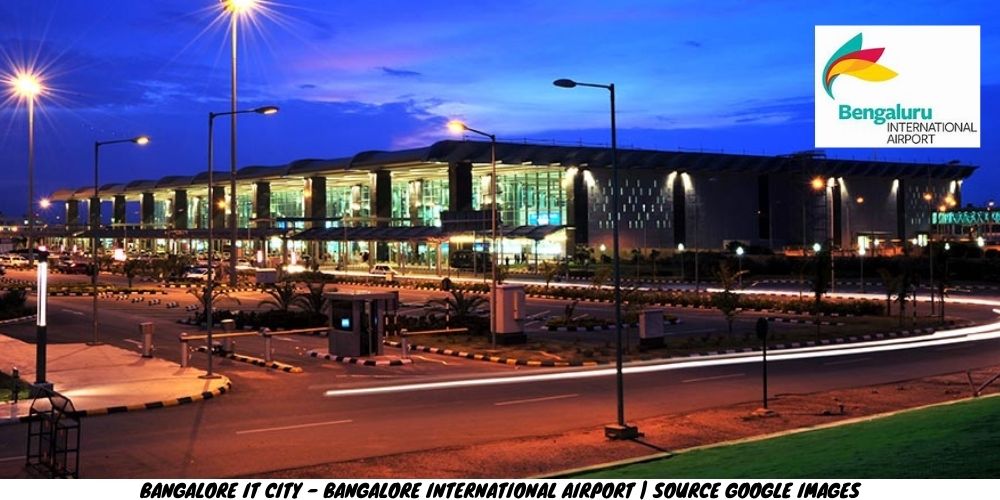 The Government’s IT Friendly Policies in the late 1990s and early 2000s was instrumental in setting up the International Tech Park at Whitefield and Electronics City. ITPL a joint venture between India and Singapore and houses majors like TCS, Mu Sigma, and Oracle.

While E-learning has seen a meteoric rise in the last 4-5 years. Internet platforms like Unacademy, Byjus, and Vedantu offer training in cutting edge technologies like Cloud Computing and Artificial Intelligence. This means the Indian Engineer is bound to become innovative, smart, and skillful. The influx of bright engineering, technology, and management graduates into Bangalore shows no signs of abating.

The Electronic city is one of India’s largest Electronic IT industrial parks spread over 800 acres in South Bangalore. Over 200 IT companies share space in the special economic zone. Not surprisingly the main campuses of IT/BT majors like Infosys, Wipro, and Biocon are situated here.  An interesting fact is that more than 19 IT parks here serve customers from all over the world.

While the average salary of an engineer based out of Bangalore is about $8,600 a year. Which is about 13 times lower than Silicon Valley’s average and one-eighth the global average.  It has made homegrown IT majors like Infosys and Wipro leapfrog the competition by beating the cost curve. This translates to increased revenue for companies having operations based out of Bangalore and other cities in India. 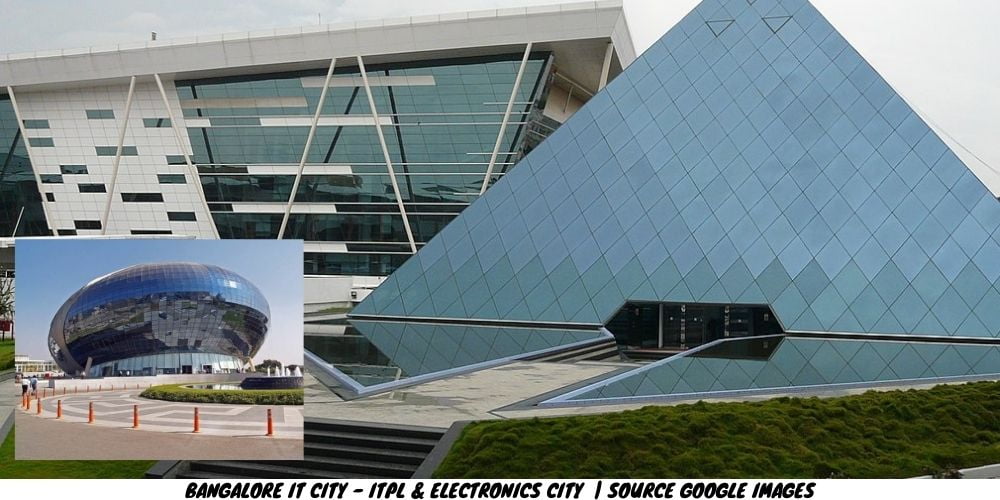 Infosys share price indicates the meteoric these tech moguls have witnessed over the years. From an initial capital of $250, Infosys has grown to become an over $13 billion company in revenue, with a market capitalisation of over $ 98 billion. The IT bellwether and its subsidiaries has over 200,000 employees with 1626 domestic and international clients. 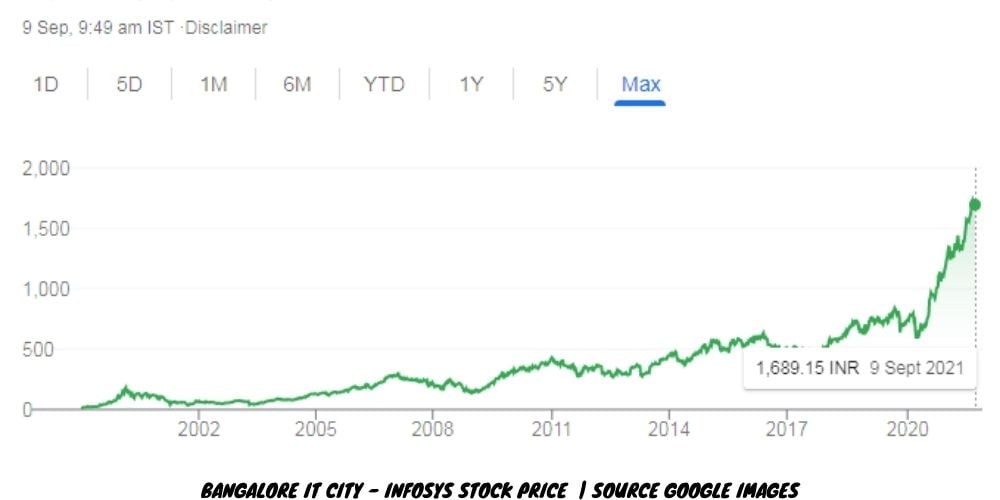 Bangalore is a melting pot, a hotbed for tech entrepreneurs and venture capitalists alike. These entities flush with cash vying are investing in unicorns with the potential to be the next phenomenal internet company. Companies like Flipkart and Myntra that started operations in Bangalore are now valued at over $37 billion. 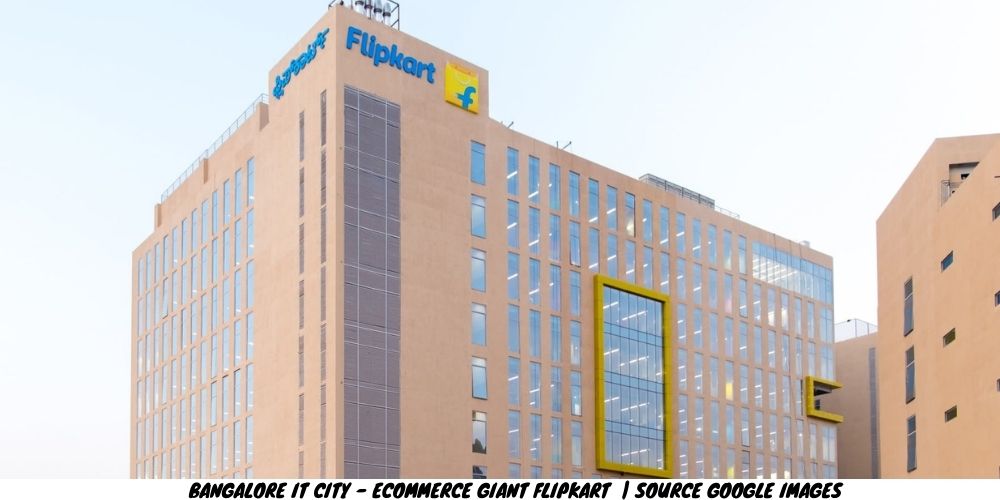 Ola Electric Scooter is one ingenious initiative in green mobility undertaken by Ola Electric. The Ola Electric Scooter has caught the fancy of the millennials and the young alike. It boasts impressive specs with a top speed of 115 km/hr, a mileage of over 180 km per charge. These scooters are available in 10 colours and shades.

The company is building a mega factory in the outskirts of Bangalore to make this plan a reality. When fully complete it will produce over 2 million units a year. Ola Factory will be a 500-acre campus with 100 acres of forest area. The ultra-modern factory will employ 3000 artificial intelligence assisted robots in ten production lines. It will have the capacity to produce one scooter every two seconds. 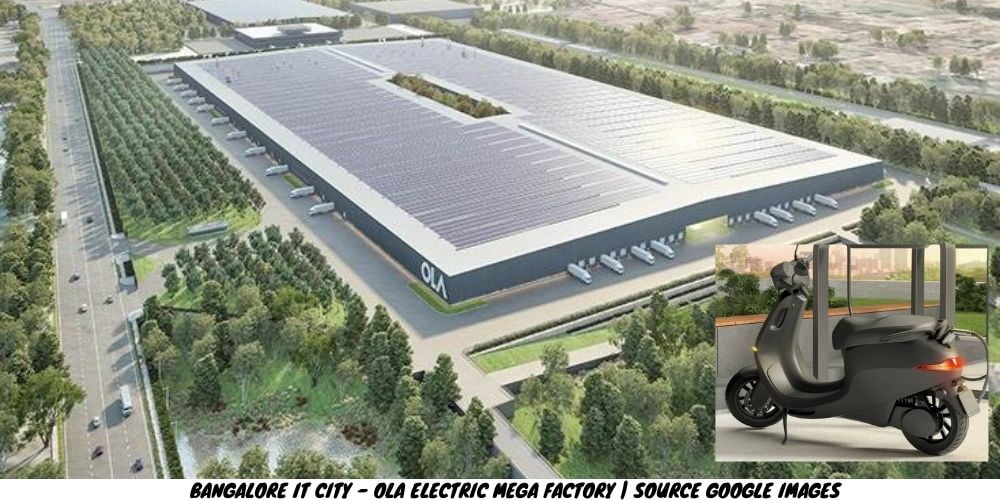 Bangalore’s rapid progress has meant a better standard of living for its residents. But it is losing its famed green cover to development. This has also impacted ground water levels in many areas in the city. The Government of India is doing its part to reverse this trend the “Smart City” project. It is an initiative to improve the quality of people’s lives by enabling sustainable development a boost.

Its harnessing technology as a means to create smart outcomes for its citizens. The project envisages providing assured electricity, adequate water supply, and proper sanitation to its citizens. With robust connectivity, green technologies the dream of creating a sustainable ecosystem is not far away.

Bangalore has earned a reputation of becoming a hub of innovation in healthcare, biotech and software services. One beneficiary is the booming demand for medical tourism. The city enjoys a salubrious climate with lush greenery, parks and streets lined with trees. Tourist to Bangalore can also take advantage of the many health care establishments dotting the metropolis. 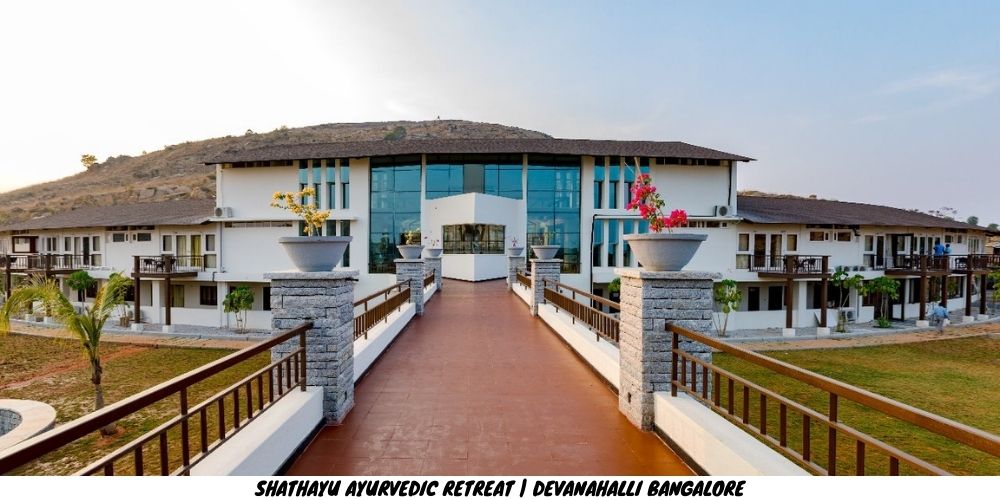 It is one such premier healthcare resort located away from the hustle and bustle of the Bangalore Metropolis. Shathayu Retreat provides holistic wellness services that take care of the mental, physical, spiritual, social, and lifestyle aspects of customers staying at the centre.  Our wellness program is designed with over 120 years of ayurvedic practice passed down through five generations. 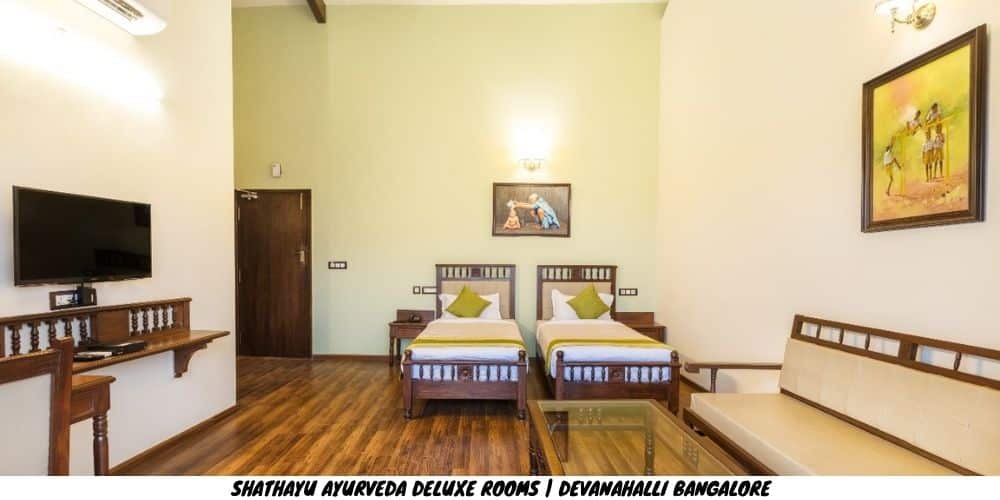 The Ayurvedic retreat centre is surrounded by hillocks on three sides with a perennial lake on the other offering side, offering a perfect ambience to recharge, recuperate and reenergize.  We customize our wellness programs to suit the specific needs of the customer.  Shathayu specializes in weight management, pain management and de-addiction.

Shathayu specializes in weight management, pain management and de-addiction. To get to know more about the many wellness packages offered by Shathayu Clinics please click the link here. 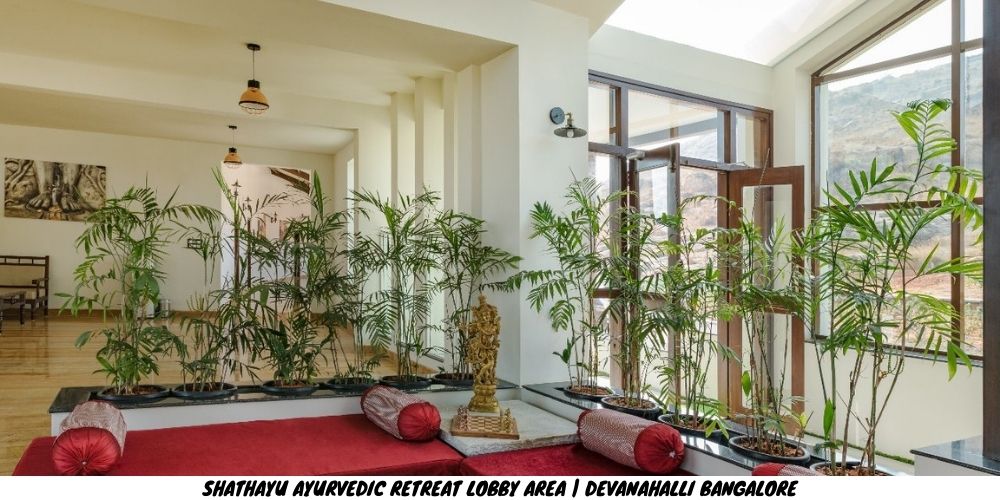 Bangalore IT City – The Juggernaut has just begun …

Bangalore is true to the phrase as being called “The Silicon Valley of India”. It is on the verge of greatness because the quality of workmanship done by Bangalore based companies is second to none. Bangalore based engineers work on complex technologies in aerospace, telecom, and biotechnology with consummate ease.

Bangalore wears many hats, these statistics is sure to make everyone take note of its immense potential and capabilities.Here are some interesting facts about the Bangalore IT Juggernaut. The city is in for the long haul which means everybody is happy about it.

“Bangalore will always greet you with dreamy weather, Carnatic fusion melodies, a signature breakfast of masala dosa and filter coffee, and notorious traffic of course.“